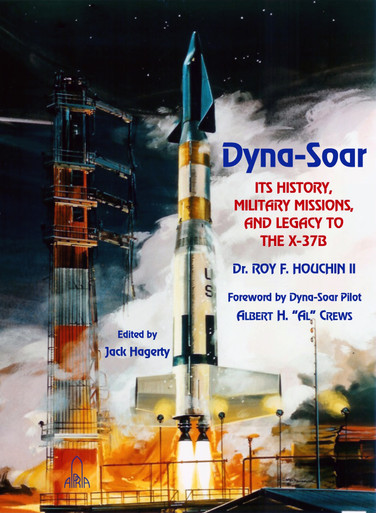 ITS HISTORY, MILITARY MISSIONS, AND LEGACY TO THE X-37B

Based on Eügen Sanger's German WWII research for an "antipodal bomber," the Dyna-Soar (“Dynamic Soaring”) glider would be launched on a large booster, be over the "area of interest" at any spot in the world in less than an hour, collect its intel and land on a conventional runway anywhere in the western US. Total mission time: less than two hours from liftoff to touchdown. Other versions had full orbital capabilities to service any of the Air Force space stations being proposed in the early '60s.

Part I, written by Air Force historian Dr. Roy Houchin with full access to all official documents, details the history of the program. Part II, written by the editor and aerospace historian, Jack Hagerty, covers the amazing technology developed to allow the Dyna-Soar to accomplish its seemingly impossible mission and all of the subsequent programs that benefited from that research.

This book will be the definitive work on the program for some time to come.

Prologue - A Flight of Fancy

PART I - THE DYNA-SOAR PROGRAM

Chapter 5:A Meeting in Denver and a Final Look at the Anti-Satellite Mission: 23 October—10 December 1963

Chapter 9: Alternate Configurations and a Legacy to Other Programs

Glossary of Acronyms and Program Names