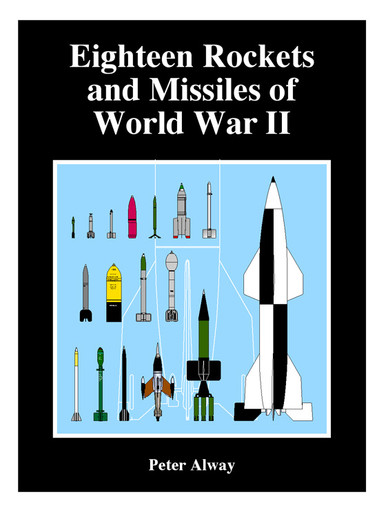 Eighteen Rockets and Missiles of World War II  is the latest of Peter Alway’s supplements to Rockets of the World.  It tells some of the less-often told stories of World War II rocketry, through examples from the five most important warring countries. While the V-2 is the best-known rocket of the war (and as such it gets its own booklet), these five nations fired millions of smaller solid-fueled rockets in combat, ranging from handheld-bazookas to rack-launched Katyushas to air-launched rockets from each country. Like all booklets in this series, each rocket gets a detailed dimensioned reference drawing.  While all of the photos are reproduced in black and white, the drawings include the complete color data you need to paint your models accurately.

Entries on each of the following rockets include historical summaries and dimensioned and color-keyed drawings.