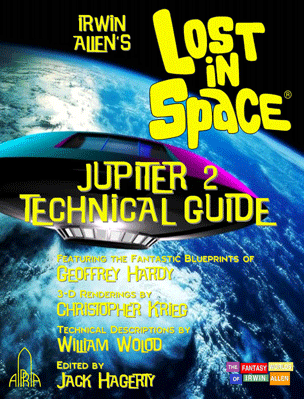 Irwin Allen's outer space adventure series, Lost in Space, continues to amaze. Now 45 years after it debuted on CBS, folks are still enthralled by the adventures of the "Space Family Robinson" travelling around the galaxy in their iconic spaceship, the Jupiter 2.

This book takes over where previous fan generated efforts have left off. LiS wasn't just a "monster-of-the-week" show. In fact, considerable research into real space flight and serious science fiction concepts of space travel went into the show’s design. Vestiges of this research can still be found in the function of theJupiter 2 and the other equipment of the expedition.

Many of the fans, who watched the show as wide-eyed youngsters, went on to write the "tech manuals" that, with the rise of the Internet, have spread worldwide. The problem is that many of those works were more rooted in fantasy than the show was. This book changes that. Written by professionals and edited by an aerospace engineer, it makes the hardware as real as possible while remaining true to the stories. With seeming half of fandom writing stories and designing games for the other half, we expect this to become the standard reference for the expedition that was "Lost in Space."