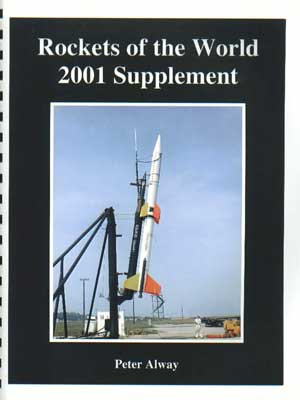 Rockets Of The World 2001 Supplement

Rockets not found in Rockets of the World or other supplements. Includes historical summaries with dimensioned and color-keyed drawings. Most also include photographs.

The Rockets of the World 2001 supplement features some of the most unusual rockets to fly. It covers an assortment of NACA test model configurations launched from Wallops Island to measure supersonic drag, a stability test of 2-finned rockets, spherical rockets, and a balloon-launched flying saucer. If you like cigar-shaped 1950's rockets, you'll find a lot in this booklet. There are also some more conventional sounding rockets from three countries. While all but one of the photos are reproduced in black and white, the drawings include the complete color data you need to paint your models accurately.

The following rockets are covered in varying degrees of detail